We Can Now Cut and Decode Tubular Keys For Vending Machines

Did you lose your only key to that vending machine? We now offer a solution. We can now pick open and decode your lock, so you have a new working key. A tubular key is found on vending machines, work vehicles, tools boxes, arcade machines and more. We are here to help. Call All City Locksmith of Rancho Cucamonga for All Your Key Needs 909-229-4955

A tubular pin tumbler lock, also known as a circle pin tumbler lock, radial lock, or Ace lock after its original manufacturer, is a variety of pin tumbler lock in which a number of pins are arranged in a circular pattern, and the corresponding key is tubular or cylindrical in shape. Most locks use between six and eight pins, although some use as few as four or as many as ten.

Tubular locks are commonly seen on bicycle locks (such as the Kryptonite lock), Kensington computer locks, elevators, and a variety of coin-operated devices such as vending machines, and coin-operated washing machines.

Tubular pin tumbler locks are generally considered to be safer and more resistant to picking than standard locks. This is primarily because they are often seen on coin boxes for vending machines and coin-operated machines, such as those used in a laundromat. However, the primary reason the locks are used in these applications is their lack of the depth requirement that most other locks require.[1] 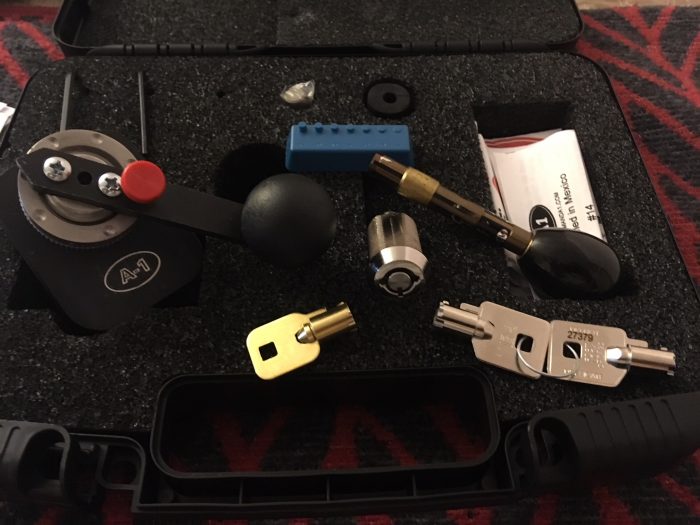 No votes yet.
Please wait...
Voting is currently disabled, data maintenance in progress.
Categorised in: Blog This post was written by admin

Personalized mobile locksmith services that’s at your service when you need us. Proudly serving Rancho Cucamonga and the Inland Empire since 1993.

If you are in need of a copy of your tri mark key, don’t hesitate to call All City Locksmith. […]

If you are looking to beef up your security, we definitely recommend Mul T Lock Deadbolts and Key In Knob […]